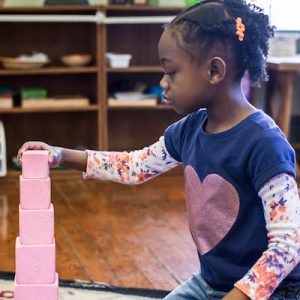 Montessori is a teaching philosophy and program developed by Maria Montessori back in the early 1900’s. The interesting thing is that it has success all over the world and neuroscientists say it develops our brains in exactly the way they need to be developed.

There are so many “parts” of Montessori that just work:
The hands-on material,
The multi- age classrooms,
Learning at your individual pace (which well outpaces most group instruction),
The relationships developed over time, and
The emphasis on “soft-skills” (the ones we wish our co-workers and employees had).

You can read a lot about Montessori on –line. It’s interesting to note that the people who really get excited about this method of teaching are not the educators who are trying to figure it out – but the business world, which has seen and been convinced of its effectiveness by watching its graduates in action. Montessori just builds a better human: one who understands and empathizes, one who produces while appreciating the process.

Look here to learn more of what people are saying about Montessori:

Listen to a Podcast of NPR’s The Parent’s Journal featuring an interview with Dr. Angeline Lillard, author of Montessori: The Science behind the Genius.

Hear the Google founders credit their Montessori education for their success.